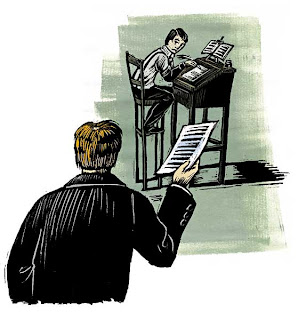 However, I would quite prefer to attend this week’s marathon reading of Herman Melville’s Bartleby the Scrivener: A Story of Wall Street at Occupy Wall Street, and I’m pretty sure you would, too. It all begins at 3pm this Thursday, November 10, at 60 Wall Street (near but not in Zuccotti Park), where the entire text will be broken into approximately two dozen five minute portions. The whole thing should take about two rousing hours, and, while there will be present a core group of Notable Readers to get things going, anyone and everyone is encouraged to step up and read a few lines, and certainly everyone is invited to listen.
For those of you unfamiliar with either Bartelby or OWS, here’s a note from organizer Justin Taylor:

This event does not advocate on behalf of a specific policy, and there is no ideological litmus-test for being part of it; neither does your participation signify endorsement of a particular agenda, apart from general solidarity with OWS. The purpose of the event is to assert literature’s role in the public discourse, to emphasize its power as a source of cultural critique and force for change, and to celebrate a classic American parable of refusal.

So! If you support the efforts downtown and/or the efforts of writers and artists in general, or even if you’re just curious about the aforementioned Notable Readers, please come out this Thursday to stand with organizers Justin Taylor, Housing Works’ Amanda Bullock, McNally Jackson’s Sam MacLaughlin, along with coordinators Occupy Writers and the People’s Library at Occupy Wall Street, not to mention all the dedicated OWS protesters.