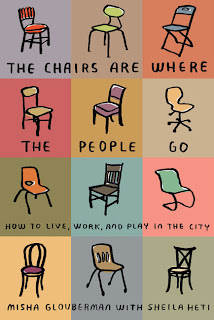 We’re always excited to hear about other curators who plan performance series with the element of surprise in mind, because we think cultural events should go beyond just showcase content in its original form. Sheila Heti is one such curator, and, along with the launch of her new book The Chairs Are Where The People Go, she’s bringing her Trampoline Hall Lecture Series to Powerhouse Arena this July.
Trampoline Hall is a lecture series where guest speakers lecture on subjects of their own choosing, but outside of their area of expertise, followed by questions from the audience. It has played to consistently sold-out houses in its hometown of Toronto, and has delighted audiences across North America. It was created by Heti, and is hosted by friend and Chairs co-author, Misha Glouberman.
On July 14, the Trampoline Hall train is pulling into Powerhouse in DUMBO for a special edition lecture/book launch event. Writers Sara Marcus and Adam Sternbergh will be lecturing (but the topics, of course, remain a surprise), with a set by Colleen Asper and Ted Mineo. Admission is $5, and we’ve been told that it would be wise to purchase tickets in advance. You can do it here.
Heti is both a Happy Ending and Yaddo alum (in fact, Amanda Stern met Sheila at Yaddo, and the rest was history and serendipity). Her new book with Misha Glouberman, The Chairs Are Where the People Go, was born out of Sheila’s idea to write a book about everything that Misha knows. As Misha talked, Sheila typed. This is that book. If you’re in the area on the 14th, get a copy, support Trampoline Hall, and get some knowledge dropped on ya while you’re at it.
The deets:
Trampoline Hall Lecture and Book Launch – Thursday, July 14
Powerhouse Arena
37 Main Street
Brooklyn, NY
6:30-9pm
Tickets: $5