The first 105 pages of acclaimed novelist, A.M. Homes’ new memoir, The Mistress’s Daughter, are so absorbing and unnerving they could easily be mistaken for fiction. The author of nine previous books, including, This Book Will Save Your Life, Music for Torching and Jack, Homes has taken the brave step of tackling her life story. Hers is an adoption story gone horribly awry, where parents behave like children and boundaries don’t exist. Homes’ memoir is divided into two books, part of the first originally appeared as a long essay excerpted in a 2004 issue of The New Yorker and could arguably stand on its own. The two books together create the extended version, with remix. 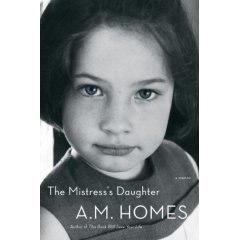 A.M. has read at Happy Ending a couple of times. Maybe just once. It seems like more than once. I’m getting old and can’t remember anything anymore. Regardless, I do know that she read at the premiere event in 2003 alongside Rick Moody, Mary Gaitskill, Nelly Reifler and Dan Zanes. Now she has a new memoir that everyone is talking about.