This is my favorite almost-published book. I’ve been calling it a “red blood cellular thriller,” so if you hear anyone else refer to it that way, tell them it’s a goddamn TRADEMARK and they owe me money.

Don’t let your cells get scraped out of you before reading this book.

Rebecca Skloot was supposed to do Happy Ending on February 10th (alongside Joshua Ferris, for Illness Night), but her book is about to EXPLODE and was moved up a week and now she can’t do it (don’t worry folks, Ferris is still in and it’s still going to be sick! Ha ha ha pun). I’m sad to lose her, but since I have issues of propriety and territory and I like to pretend I’ve discovered people who have long been known to many, I will just go right on believing that, while she ultimately had to cancel, I booked her first. Take that Oprah!

More on her book, in her own words below…. 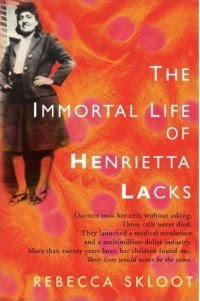 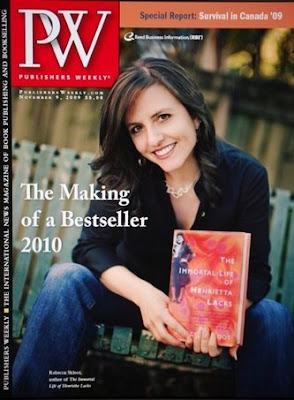 Lots of excitement and news about my book, The Immortal Life of Henrietta Lacks (aka HeLa), which hits stores February 2nd (after ten years in the works). It just got a starred review in Publishers Weekly and in Booklist, and was chosen as a Barnes & Noble Discover Great New Writers title for Spring 2010. Culture Dish is very excited about all of this. But the big news for this post is that I’m organizing a three-month-long book tour that will have me speaking nationwide at universities, scientific organizations, bookstores, book groups, high schools, and more. If you’d like me to speak about the book, about HeLa, the history and ethics of tissue culture, race and medicine, or any number of other related topics, see the Immortal Life’s interactive book tour map below. Click on your region to see when I’m scheduled to be in your area, and email me to bring The Immortal Life to your town.

The Immortal Book Tour is a grass-roots, author-funded tour on a scale that no sane publishing house would or could organize or fund. (For those not familiar with the publishing industry, see here for the New Yorker’s humorous take on why this sort of thing is necessary). Crazy as it may be, I’m convinced it will be a fun and effective way to spread the word about this book — and honestly, after ten years of working on it solo, I’m ready to go talk about it with everyone I can. I admit, I’ve imagined touring in one of these with cells painted all over it, but at this point, due to budget constraints, I may be touring in one of these. This tour will depend entirely on and funding from talks at universities and other venues, so locations able to help cover expenses get priority (and many, many thanks), but I’m also looking to hear from bookstores and other organizations in towns I’ll be visiting, where I’ll gladly speak if I’m able to get myself there. Interactive book tour map and link for below the jump (and if you’re interested in having me speak at a date after the tour, that works too: my schedule for summer and fall is wide open at this point):

Go to her WEBSITE to check out her insane THREE MONTH LONG TOUR!