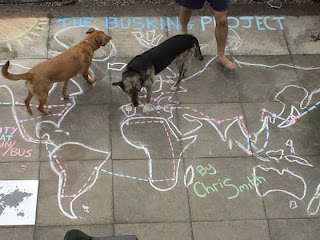 So if I lost my job and my living arrangement I’d crawl into the lobby of my old building and sob into my mail slot while furiously scratching my name off of it and trying to figure out the best way to mail my former boss a box of pee. But that’s just me. SOME people take on really exciting, productive and worthy endeavors when they’re dealt a bad hand. I think it’s called making Crystal Lite when life hands you crystals or something.
Nick Broad (of UndercoverNY) is one of those rad people, as well as is his comrade Chris Smith, both of whom are taking Nick’s recently-acquired free-time-filled homelessness to go on an around the world (green!) tour of buskers, accumulating enough footage, stories and music for a documentary, book and active website. They’ll be interviewing, couchsurfing and making mini-documentaries on their 8-12 month busking adventure, collaborating with locals wherever they land and doing plenty of valuable research on street performing.
The best way to support the project is to send some dollars their way on kickstarter (you saw that one coming, huh). The goal is twenty thou, and they’re gettin’ there! If you have any other services to provide, namely art for their donor gift pack or perhaps a comfy couch in a faraway city, get in touch with Nick at nick@thebuskingproject.com.

One Reply to “The Busking Project”

Leave a Reply to Omnigut the Merciless Cancel reply