Wow. Being in the same room as Padgett Powell, Joshua Ferris, and Ron Carlson on Wednesday was a serious charm explosion. I kind of felt like a middle aged woman living in the suburbs circa 1995 and someone hands me a mix tape that’s just Hugh Grant’s stutter on loop for forty-five minutes. The unadulterated CHARM, friends.

Because everyone was so goddamn agreeable and delightful (“Just point at me and tell me what to do”–Ron Carlson), my job backstage was pretty easy. It also meant I could hide away while the painfully dorky movie of suggested themes I’d made for Amanda played to the house. Yeesh. Next time when I start to type, “RONnin’ and JOSHin’ with PADGETT POWELL,” someone please pluck my fingers from the keyboard. What (thankfully) didn’t make it into the ‘movie’ was my attempt at an anagram of the author’s names:

“Or, put the ERRI gonad jars on Falwell’s crops.”

Not so much? Fortunately the authors fared a lot better with a themeless night than I did. Before reading from the Unnamed, Joshua Ferris even tried to work with a scrapped theme (“Illness Night!”) by presenting us with his “SICK in every respect” high school photo. Hold on to that paisley shirt buttoned to the top, Josh, I hear the ’90s are back in a big way. 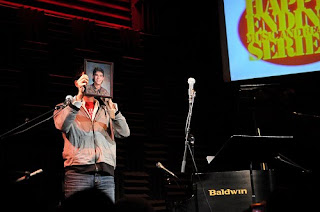 Ron Carlson–wearing a really excellent tie–cranked up the charm to 11 when he read an as-of-yet unpublished story about an inventive, time-traveling older couple running a laundromat.I don’t think this description really does it justice, but it was great, and I hope you all get to read it soon enough. 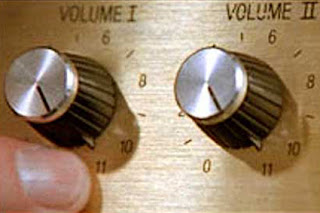 Also, I have to say I was pretty impressed when I learned that Padgett Powell had written a book entirely in the interrogative mood, had dubbed it a “novel?”, got it published, and then came on stage to read mail of both the fan and hate varieties aimed at said novel(?), and opted to stay with Amanda while in town though she’d claimed to be 15, so when I then found out we shared the self-hair-cutting bond, well—color me blown away. 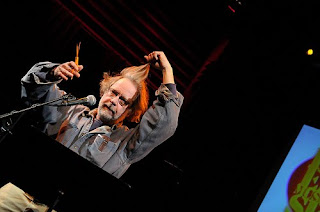 And Holly Miranda, even though your name always goes dyslexic in my mouth–hot DAMN, girl. Watching Holly Miranda sing was like finding out that that silent knitcap-metalhead girl in the back of your chemistry class had a huge secret that was revealed to you in the last talent show of the year and lo-and-behold she has this phenomenal voice and chan marshall-sad talent and you’re like, it was her all along, she’s the one! But it’s too late, school’s over, you’re going to Duke or whatever and she’s going to New York (of course) but at least Greg Mottola wants to buy your life rights (…and will probably pick a boy to play you).

She’s great, she’ll give you goosebumps, she did a Lauryn Hill cover that you can also listen to here.

All photography by Gillian Crosson (glc315@yahoo.com). All rights reserved.