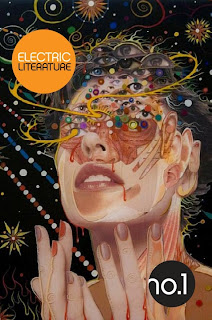 I’m pretty over the Kindle Konversation–that debate about whether an unattractive electronic device will be the Death of Books and Tangible Literature. No one writing about it seems to have an especially original opinion, and few approach Kindle as an option or an addition to existing options. This is one of the many, many reasons I’m in love with (newish) fiction anthology Electric Literature right now– rather than see sustainable print as black and white, they get that while some folks might not always want a hard, tree-filled copy, there are others who feel something for printed anthologies that “going green” can’t trump. “We are trying to create the journal we wish existed,” says Editor in Chief Andy Hunter, “putting our focus on fiction and creating a sustainable model for publishing in the future.”

And they deliver: “We are an iPhone app, eBook, and print-on-demand (which has no upfront cost). Our intention is to take the money we save on printing and pay it to writers.” Huzzah! He’s not kidding, either–they pay their authors $1,000 bucks per story, of which there are five in each issue. And because there will always be the brow-furrowing skeptical set, let’s clear something up here: “A few people assumed we have loads of money and were flaunting it, which isn’t the case. We have a little money, and are giving it all to our writers.”

I will “Huzzah!” until I hyperventilate and black out, guys.

Before I do so, let me just drop the names in their first issue, because obviously I wouldn’t be talking EL up if the fiction weren’t excellent–Michael Cunningham, Jim Shepard, T Cooper, Lydia Millet, and Diana Wagman–and let me pass on what’s next in the thrilling, absurdly savvy world of Electric Literature. “Frankly, we have way too many plans,” Hunter says. “We do want to curate an event, something bimonthly to coincide with the release of each new issue. We hope to hold our debut in October. We will be doing exciting things with Twitter soon. We are launching a Youtube channel featuring collaborations with animators and authors. We have started a pop-up bookstore that sells titles from local independent presses at outdoor markets like the Brooklyn Flea. We spent the other day staging guerrilla readings in Union Square and Washington Square Park, and are planning more. And that’s just the beginning.”