Skip to content
So you missed out on the midnight, Friday the 13th showing of upcoming (Dec. 2nd!) HERS-er Jonathon Caouette’s new film, All Tomorrow’s Parties, because you were doing something REALLY, REALLY important, like celebrating my birthday. It’s forgivable, but only because this phenom-looking movie will be back at IFC tomorrow (Friday the 20th) and Saturday, both for 12:15 am showings. Really, it looks so good. 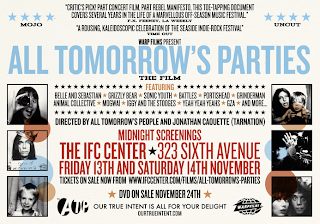 Here’s a blurb on the film from the Seattle International Film Festival:
On the eve of its tenth anniversary, the All Tomorrow’s Parties music festival is an ingenious testament to alternative music, communal living, and iconoclastic creativity. Founded by Belle & Sebastian’s Barry Hogan in 1999 as an alternative to larger, more corporate festivals, ATP is a sponsorship-free festival where the organizers, artists, and fans all stay in the same chalet-style housing complex. Every year the event is curated by a specific artist or band, essentially making each festival a concert as ultimate mix tape. This unique concept is mirrored in All Tomorrow’s Parties’ visual approach. The film is created from found or contributed footage from over 200 filmmakers, fans, and musicians who’ve attended the British All Tomorrow’s Parties festival over its history. With interviews and footage of more than 30 bands (ranging from Nick Cave to Animal Collective and from Portishead to Grizzly Bear), this post-punk DIY bricolage uses material filmed in a multitude of formats, including Super8, camcorder, and mobile-phone material. The final product, which captures the experience from the perspective of fan, artist, and curator alike, celebrates the uncompromising vitality of this unique festival experience.
Ahh, can’t wait.