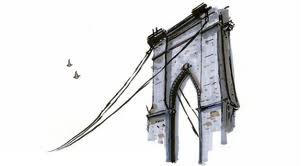 If any of y’all were in the audience at either of the two most recent Happy Ending shows, then you know what’s what when I mention the wonderful Michael Arthur and his live drawings. They’re composed of one part whimsical storytelling, and one billion parts pure MAGIC. He’s basically a stuntman of the pen, this Michael Arthur, and an unflappable one at that. This Sunday, January 16, he’s at it again as part of Magic, Music and Early Movies: Georges Melies and Sxip Shirley, a screening/live event at the Museum of the Moving Image (35 Avenue at 37 Street, Astoria, Queens). Here they’ll be showing “Brooklyn Bridge Song,” the animated music video Michael made with John Ivy for Sxip Shirley’s song. “Brooklyn Bridge Song” debuted in the Opinions section of The New York Times, and this event marks the video’s first appearance on the big screen. Michael will be showcased alongside the works of legends such as Neil Gaiman, featuring the likes of Bill Nighy and Amanda Palmer. The show starts at 4pm, and is free with museum admission. For more information, and to see a complete list of the other showings, head to the Museum of the Moving Image website. If you’re crazy enough to miss this one, Michael will be sharing his talent on January 27 at Joe’s Pub for Toshi Reagon’s birthday show. Not to be missed; tickets here.