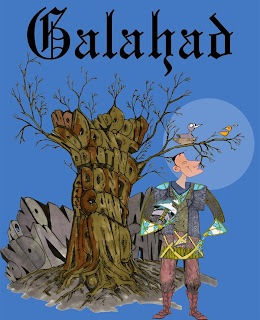 HERS’s favorite illustrator/genius Michael Arthur has made yet another stunning music video! For this one, a total gem I tell you, he’s partnered up with John Ivy, an animator who elegantly brings Arthur’s drawings to life, and sexyhot music guy Josh Ritter. Legend has it that a couple years ago, Ritter met Arthur in a bar, and the two just totally hit it off, sharing thoughts on music, art, hopes, dreams, etc. One thing led to another, yadda yadda yadda, and now we get to reap the lovely, dream-like benefits of their collaboration. Ritter’s song is called Galahad, which, in Arthur’s words, is “a whimsical story about a repressed but cocksure knight, an angel with an agenda, some tempting stable-boys and, of course, Kenny Rogers.” Kenny Rogers! Swoon. The video, after the jump, debuted on The New Yorker‘s website last week. Watch it. Now. But be sure to have a fainting couch nearby.