Every month, one of my two new amazing interns (yes, I have TWO!) will post a wrap up of the last Happy Ending show. This month’s post is from Kayla. 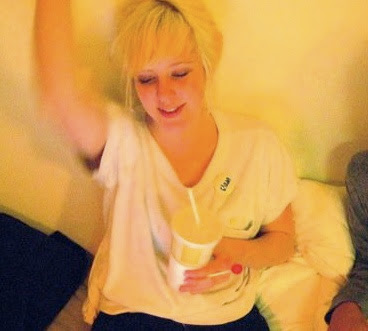 Must be a sign of the times that at varying points during our Ideas and Inventions show there were onstage two laptops, three baby pianos, one rotary cell phone (seriously), a successful satellite convo, an unsuccessful showing of a movie clip, as well as plenty of literal and figurative projections of the past and future of innovation and proof of how the two intermingle throughout…and one Burning Man attendee. You can’t win ’em all.

I’ve tried to explain musical guest Tristan Perich’s music to multiple people who weren’t at the show, and the best I’ve come up with is, “He hooks up classical instruments to microchips and makes them sound like a robot barbershop quartet. And it’s really neat.” Somehow I have a feeling this explanation would disappoint him, but I’m hoping my own bafflement translates to your intrigue, and you check him out for yourself immediately.

Orange Prize-nominee and Nikolas Tesla extoller Samantha Hunt joined us from London via satellite, answering such hard-hitting questions as, “Is Brooklyn in da house?” and “How would Tesla feel if he knew there was a hair metal band named after him?” (the answer: pleasantly surprised! Apparently Tesla the Hair Metal Band contributes proceeds to a Nikolas Tesla devotee in somewhere in the northeast, who makes commemorative Tesla busts and whatnot. Dear Nik T. superfan : I’m always in the market for a sweet Tesla key chain). Then, from what I could gather, Samantha used only her pure, unadulterated charm to make a lightbulb glow in her bathroom.

Twelve-foot tall Dan Rollman proved himself a true innovator multiple times over with his Massive Bouffant Strategy for the NBA, his efforts to breach those pesky religious standards for holiday mall scenes by applying to be one of Santa’s little Jewish helpers, his populist method of documenting world records (i.e. set any record and you’re in, meaning I really deserve some credit for being the first fifth grader to hula hoop for three hours straight while watching cartoons), and by bravely eating spam for the first time onstage (verdict given after gag reflex repressed: “Very salty.” Now you know).

Oh Steven Johnson, how we adore you and your teachings on “How to Invent a Slum.” It’s a good thing your bio said, “Lives in Brooklyn with his wife and sons,” because from the sounds of it backstage, you would have a gaggle of lady suitors after you otherwise. And seriously, anyone who can be that charming (and optimistic!) while talking about horse corpse-infested ponds has my vote. Now go follow his twitter (and ours) because it’s about time Ashton know what it feels like to eat tweet dust.