Is Re-blogging the new RT’ing?

Out of sheer laziness, I am completely stealing Laurie Sandell’s blog post about last night’s BBQ on Kristin and Derek’s stoop. I’m not even going to say my own thing. I’m just going to re-post Laurie’s entire blog, changing her name from “Yours truly,” to Laurie Sandell and mine to “Yours Truly.” Let the re-blogging revolution begin with me…

Last night my friends Derek and Kristin had a BBQ on their Brooklyn stoop, which is right around the corner from Laurie Sandell’s. In fact, she can see into their kitchen from her bedroom window (Derek swears they can’t see into hers.) Clockwise from left to right, that’s Lila Cecil, who runs Paragraph, Kristin Dispaltro, Laurie Sandell, Abby Pesta, deputy editor of Marie Claire, Yours truly, Derek Loosvelt, and Charlie I-Don’t-Know-His-Last-Name-But-He-Has-A-Very-Cute-Daughter-Who-Is-The-Owner-Of-That-Hula-Hoop. That little white blob in the middle is Violet. Not pictured: Susan Gordon, our resident chef and Italophile, and Keith Pandolfi, who lives next door to Derek and definitely can’t see into Laurie Sandell’s bedroom because he’s on the ground floor. It’s all very Melrose Place. 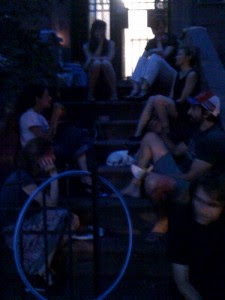