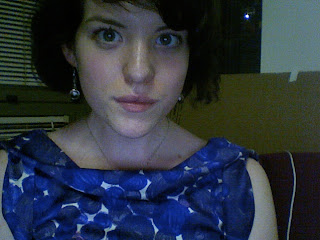 Last night at Happy Ending, I was entrusted with camera duty so I was, again, able to hear and see what was happening onstage.

Larkin Grimm has a voice like no other, and she sells records with CDs INSIDE. How cool is that? I don’t own a record player, and I haven’t bought a cd in a year or two. I am, however, thinking about buying her record/cd for the insanely cool boys down the hall who actually listen to records in their free time. Like, without doing anything else. It completely blows my mind. Anyway, Larkin sings like an ethereal forest goddess, and makes me want to run right out, buy a record player, and chill. For the finale, she sang a cover of The Beatles’ “Because” that gave me (and everyone else) chills.

Then Amanda came out and spoke French like it was her job (That would be a fun job, non?), and that was the best thing ever. Then Tanguy Viel and his brilliant translator read from Beyond Suspicion and completely mezmerized all of us with the power of the French language and beautiful, suspenseful prose. Watch out for Tanguy, though, he rates his friends using some kind of New Math, that even an iPhone app couldn’t help me solve. C’est magnifique!

Finalement, Stephen Elliot read from The Adderall Diaries, and then fully made out with a random audience member onstage. I’m not gonna lie–it was hot.