When we last heard from guest blogger and HE alum Clifford Chase he was explaining to us the process of bringing his beloved stuffed bear to life in the stage version of his hit novel Winkie. Now he’s back with a heartwarming tale about lost luggage, surprises, festive children’s outfits from Tehran, strange kinships, and the inspiration of objects. Click the jump for the good stuff, which is actually the story behind the risk that Chase performed at a Happy Ending show back in 2006.

Clifford Chase is the author of the novel Winkie, which has been adapted for the stage by the Godlight Theater Company and plays through Sunday, April 10 at 59 E 59 Theater in Manhattan. Tickets are $25.

My risk for the night I read in the Happy Ending series was to tell the story of how I had recently found in my luggage some stuff that didn’t belong to me. The objects, which filled a small plastic shopping bag from a shoe store in Tehran, included several brightly colored children’s costumes, a red woman’s dress, and sheet music for the Persian lute. I brought all these to show the audience, along with the Middle Eastern garb that my teddy bear wears in the final photograph of my novel, Winkie. 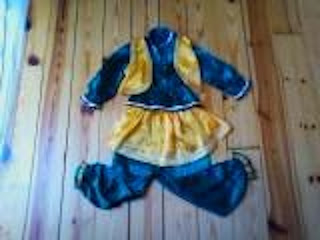 It made an amusing enough story (though it couldn’t hold a candle to the guy who stripped down to his underwear that night). Then, over the next several months, I tried to write about those lost objects, along with my fruitless quest to find their rightful owner. In the end I came to understand that what I had thought of as simply a comic anecdote was actually something darker and deeper.

In his essay “That’s Amore,” David Sedaris writes of his strange friendship with a nasty, racist neighbor on Thompson Street, and he mentions having told funny, shocking stories about her at parties. But the essay transforms these tales into something not only hilarious but also moving and strange: a meditation on both loneliness and friendship.

In the case of the missing costumes and lute music, the deeper story was my mother’s death earlier that same year. As I struggled to write about the luggage mix-up, I slowly began to see that the weird feeling of finding those weird objects rhymed for me with the very feeling of losing my mother—in the sense that grief is always unexpected and unwanted, even alien and incomprehensible. So what had started out as a show-and-tell before a slightly inebriated audience turned out to be the final chapter in a series on my parents, all of which will be part of my next book, The Tooth Fairy. So thank you, Happy Ending.