Skip to content
Some facts you may already know about today’s guest poster, Anna North: Her first novel, America Pacifica, was published in May 2011 by Reagan Arthur Books / Little Brown. She was born in Williamsburg, Virginia, grew up in Los Angeles, and now lives in Brooklyn. She graduated from the Iowa Writers Workshop in 2009, having received a Teaching-Writing Fellowship and a Michener/Copernicus Society Fellowship. Her fiction has appeared in the Atlantic Monthly, where it was nominated for a National Magazine Award, and on Five Chapters, and is forthcoming from Glimmer Train. Her nonfiction has appeared in The San Francisco Chronicle and on Jezebel, where she is a staff writer.
A fact you probably don’t know about Anna North, and which you’ll learn more about when you read her guest post: According to Amazon.com, she has been a celebrated children’s tennis teacher since three years before her birth, and America Pacifica may or may not be a heavily ciphered guide on how to have earth-shattering success with racquet-wielding tots. Click the jump to meet Anna, and learn the secrets behind her second identity.
I learned about my phantom coauthors a few months before my book came out. A friend sent my the Amazon listing: America Pacifica, by Anna North, Vic Braden, and Bill Bruns. Who were these guys, my friend wanted to know, and what part of my book had they written? I was pretty sure I would’ve remembered a couple dudes standing over my shoulder in the coffee shop while I scribbled out my first novel, so I did a little research.
As it happened, my novel had been given the same ISBN number as a 1980 instructional book called Teaching Children Tennis the Vic Braden Way, by none other than Braden and Bruns. 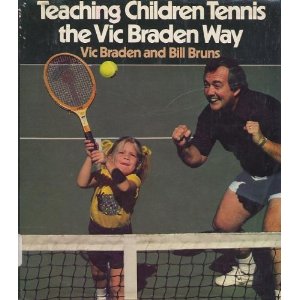 This also explained certain other oddities in my book’s Amazon listing, like the fact that it was tagged “teaching tennis to children” despite being set on a post-apocalyptic Pacific island where there are no tennis racquets. It seemed that America Pacifica and Teaching Children Tennis had become braided together in internet space, like Beszel and Ul Ooma in China Mieville’s The City and the City. They turned out to be pretty difficult to unbraid.
It wasn’t so hard to get Vic and Bill deleted from my listing; my Kafkaesque nightmares of having to prove I’d written my own book proved to be unfounded. The tennis tag was a lot more stubborn. An Amazon representative wrote me,

I’m sorry to hear a Tag was added to the item detail page for “America Pacifica: A Novel” that is not related to the novel. […] We understand your concern, but the tag doesn’t fall outside of our guidelines. Therefore, we cannot remove the “teaching tennis to children” tag from our site. I apologize if this causes you any frustration.

It sure did cause me frustration, but there wasn’t much I could do. As of this writing, the tag is still there.

Once the book came out, I was touring and so, mercifully, I had less time to obsess over my Amazon page. A few weeks after the release, though, I did notice something interesting: although Vic and Bill were no longer listed as authors of my book, I was now listed as an author of theirs. This remains one of my proudest achievements, as Teaching Children Tennis came out three years before I was born.

In order to fully embrace my role as prenatal coauthor, I, of course, had to familiarize myself with the book in question. How could I tell people which parts I, as a gleam in my mother’s eye, had helped write? Luckily, there was a lot to choose from. A section on “How to Work with the Less-Talented Youngster” resonated with me as someone who, in eighth grade, failed “throwing.” “How to Work with a Youngster Who Can’t Hit the Ball” felt even more familiar. Ultimately, though, what struck me most was the book’s emphasis on gentleness and flexibility. From the section “What to Do when Learning Bogs Down”:

If you start finding yourself in situations in which your child just can’t hack the instruction you are giving and you fear the point is coming that he might leave the game in frustration over his inability to execute the “proper” strokes, remember: this enjoyment of the game must come first, not your ego as a tennis instructor. If he just won’t accept the concepts you’re teaching — “It just doesn’t feel comfortable your way” — or he can’t seem to learn the appropriate techniques needed for improvement, then you must let him adapt a playing style that is natural and comfortable to him, even though you know it may severely limit his eventual success as a player.

This strikes me as good advice for a writer, too — don’t force yourself to do what you think is correct, but instead do what brings you joy. This approach may not have much effect on anybody’s success, for good or ill. What it will do is make writing fun and rewarding, which, since a novel today is likely neither to cure cancer nor make a ton of money, is a very important concern. I’d argue that books are a lot like sports in that they make our lives more interesting in quantifiable yet important ways, and that they’re among the relatively few things in life that exist primarily to be enjoyed. And as much as possible, people who write and play them should share in this enjoyment. So if Vic and Bill ever want to collaborate on another book, we might have a lot to talk about.