In case you missed Part 1 + Part 2 of Lisa Dierbeck’s Top Secret Mischief + Mayhem Diary, well damn, get on it already!  If you’ve been keeping up with all the subversive fun, though, then you’re in luck because we have another installment today, full of manifestos, demands, pleas and booze.  Read on after the jump and start copy/pasting potential New Year’s resolutions:

“Start a movement. Splash an entire glass of water in a critic’s face. Show too much cleavage. Weep.”

Mischief + Mayhem is a new independent press dedicated to everything that is not allowed. We are to books what red meat and cocaine are to health. We don’t believe novels should be educational or uplifting or good for you. We like our fiction mean, unsettling and savage. Mischief + Mayhem is a passageway to ugliness, oddity, rage, insanity, sorrow and depravity.

No to memoirs with redemptive endings.

No to the tame, the timid and the mild.

No to formulaic plotlines.

No to appropriate behavior and politically correct opinions.

No to blandness and Botox, boredom and beige.

No to “universality,” uplifting messages and saccharine sentiment.

Yes to degenerates and to delinquents.

Yes to sluts and to scoundrels.

Yes to wrinkles, weirdness and warts.

Yes to creepy, unhinged and tormented protagonists who are “unsympathetic.” Yes to characters that do stupid things, act like assholes, sleep with strangers, take drugs or rob banks.

Yes to the entire deranged spectrum of art, literature and the human comedy.

You were just reading my personal Manifesto. Each member of the band wrote one. I re-read it just now, to see if it bears any relationship to what I believe in and what I’m doing. Guess what? It does. Phew.

And yet it was written in a moment of optimism and chutzpah, as evidenced from my expression in this shockingly radiant photograph taken 9 1/2 Weeks ago or so, chumming it up with evil genius Colin Robinson, a British fellow, co-publisher of OR Books, the rabble-rousing indie darlings who are our partners. (Yes, he does look a little stiff and unaware of my literary superstardom here, I agree. British, like I say. I had some idea I’d be the leader of my band. What was I thinking? The Pretenders, that’s what. Dream on. I am the lone female in a boy’s club. Send gin?)

Since then, the landscape for novels has grown ever colder and darker; winter has arrived. The Spirit of the Book can’t survive without…what? Why, Reader, you. Books are in trouble. Write your own Manifesto, immediately. Take some Aktion for a Dying Book Biz on the Verge of Bankruptcy today. Next time, here in my Top Secret Diary, for your eyes only, I’ll dish on why we’re starting to spell it…with a “K.”

Ten Subversive Aktions to Revive the Book in 2011

Proclaim your love for novels, poetry and short stories – the species some meanies claim are half-extinct.

Carry a book by an obscure author to your next holiday party and flaunt it instead of a designer handbag. Books are better than bags; you know this. Bags, marked up 300% after manufacture, went the way of subprime loans in the housing boom. Finished.

During a lull in conversation, name-drop: Colette, Bronte, Beckett. Make a shrine with candles, cupcakes and photographs. Say a prayer to these, your saints. (You pick ‘em. Tip: saints that are still alive may give you red flowers if you play your cards right.)

Read James Wood in The New Yorker and take a strenuous stance, for or against. Denounce realism. Oppose postmodernism. Have an opinion!

Start a movement. Splash an entire glass of water in a critic’s face. Show too much cleavage. Weep.

Stop eating in restaurants a hundred nights a year. What are you, rich? Eat a sandwich, for God’s sake. Cook stew. (Lentil.) With the money saved: buy a new novel twice a week.

Be dashing, be brilliant – come to the rescue! The Book is fading fast. She’s been in an accident. Thin, weak, with the fragile beauty of a ballet dancer, she’s wrapped in sterile gauze bandages and that dark stain on her spine is seeping like red wine spilled on a tablecloth. The Book is balanced precariously between life and death. Aktion can revive her, possibly. But when we remove her bandages, she will not be the same Book we all fell in love with. She’ll emerge from her chrysalis with a hard exterior shell, two sets of wings and six arms growing from her waist – a freak, a mutant. A monstrous goddess.

(That was my Top Secret Diary for this week, in case you didn’t detect the autobiographical element. I’m sneaky that way. See how fun? Tune in next week for more clues, plots for Mischief, an alarming and uncomfortable private Aktion…and a dramatic conflict Based on a True Story, just the way you like it.) 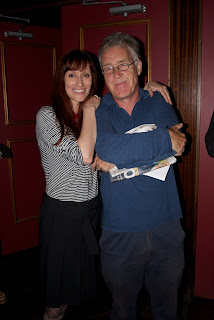 One Reply to “GUEST POST: An Update from Lisa Dierbeck”