I adore Robin Black. I adore her because she’s an amazing writer with a wonderful book of short stories out this year–If I Loved You I Would Tell You This (with a beautiful cover to boot!), because she has a great blog that makes me wish I’d had the chance to study with her, because she’s worried that by  contributing this delightful series of true-life comics to the Happy Ending Blog, readers will think that she thinks she’s an ARTISTE (zeroing in on that universal modest-writer-fear that the simple act of creating requires too much ego to bear), rather than recognize that she’s a skilled writer having fun telling a story with a different medium (she is!  And we love it!), and I adore her because, well, probably because I’ll always feel a slight romantic-collegiate kinship with other Sarah Lawrence girls.
But mostly it’s the amazing writer part, and the fact that she produced–special for their HERS Blog–this series of original comics about the small pleasures and larger embarrassments that come with releasing your book into the hands of interviewers, critics, and Q&A audiences, and facing all three on tour.  Here now, the first of the series, which I believe addresses the latter of those three… 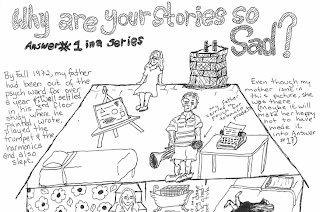 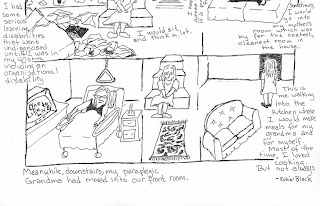 We’re back and we can prove it.