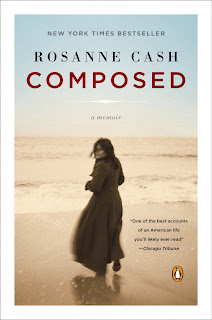 Grammy winner, writer and HERS friend Rosanne Cash‘s bestselling memoir, Composed, is finally out in paperback. To celebrate the release, Brooklyn’s aptly named powerHouse Arena is hosting a launch party next Thursday, August 11 from 7-9pm. Ms. Cash will discuss the book–a collection of intimate reflections on her experiences as the daughter of an American music icon, and as a performer and mother–with The New Yorker‘s Susan Morrison.
From powerHouse:

Composed is full of personal recollections and anecdotes. Moving, inspirational, honest, and witty, Cash writes compellingly about her own upbringing in Southern California with a father who was often absent, and at the time struggling with drugs, and about her relationships with her mother, Vivian Liberto, and later, her stepmother, June Carter Cash. She writes about her teenage years and a hilarious stint working for Columbia Records in London; recording her first album; gradually working her way to chart-topping success and what that notoriety cost her; her marriage to Rodney Crowell, a union that made them Nashville’s premier couple at the time; taking a new direction in her music, and leaving Nashville for New York; moving there permanently in 1991; the process of songwriting; her life-changing ordeal with brain surgery; balancing her roles as recording artist and mother to five children; dealing with the painful loss of her parents; and, the fulfillment she has found with her husband, the Grammy Award-winning producer and musician John Leventhal.