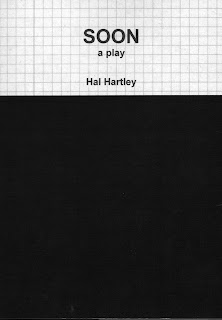 Hal Hartley’s play SOON is now bound and published and author-introduced and available for purchase here. As you probably know, Hartley’s primarily a filmmaker, responsible for such acclaimed works as Surviving Desire, Truth, Henry Fool and–well, there are lot of them we could list here–but SOON, his only play and sort of antecedent to The Book of Life, looks fascinating. From the program notes:
This play, which was later staged in Antwerp, and again in California in 2001, is based upon the 1993 events that took place in Waco, Texas, in which the Branch Davidians, a Christian fundamentalist group, engaged in a terrifying and wasteful stand-off with agents of the U.S. government. The initial clash was in a gun battle that left both fundamentalists and federal agents dead; after a 51-day siege, a fire in the central building of the Branch Davidian community killed many of the remaining occupants, including 21 children. The actions had a profound impact on Hartley, who was not and is not by nature a religious person. It affected him as a citizen, and left him wanting to better understand the civil situation and to have a better grasp of freedom of religion and his country’s gun laws. Ultimately it plunged him into a new awareness of the centrality of the media in contemporary life: the daily 24-hour news cycle that tends to blur politics, advertising and journalism into an easily digestible product for quick and disposable consumption.
-Anders Wright.
Music from the work is also available for streaming at the site, with more to come in the next couple weeks.