Perfect, beautiful pre-fall day for the Brooklyn Book Festival. Amanda and co. packed the steps (and the ground, and the area outside the ground and the steps, and maybe even a little of the space behind the stage) for the Happy Ending Series’ comedy-themed show, with readers Rakesh Satyal, Jonathan Ames, David Cross, and musician Jonathan Coulton.

After an IKEA jam from Coulton (which I’ve translated into IKEA-speak and the chorus goes, “Figgjo Grundtal Klappsta Klappsta Ektorp!”), Rakesh Satyal read from his incredibly endearing and sharp book, Blue Boy, and provided what Amanda Stern declared, “The best save and recovery in the history of Happy Ending”:

Satyal’s risk was his choreographed dance to Billie Jean. Billie Jean CD did not play. Quiet, patient (…) audience. Tension mounting. Increasingly nervous sound guy: “There’s nothing on the cd. OH SWEET GOD THERE’S NOTHING ON THE CD! SAVE YOURSELVES!” WUH-OH, as we say in the biz. Satyal gracefully saves us from riot outbreak and scoops us all back into the palm of his hand by singing, in its entirety, AND dancing to Billie Jean. Audience accompanies on “WHOO-EOOO-OOO”s. Calm (and laughter) restored. Well played, Satyal, well played.

Jonathan Ames recounted a youth of corsets, retracted balls and Hairy Calls. Ah, sweet nostalgia for simpler times, when the hardest decision you had to make was between going for the blonde and humping a tree with your buds.

Then he got paddled by David Cross, of course. 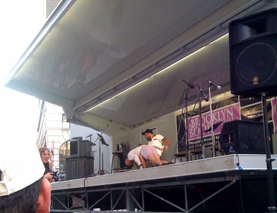 Fortunately for Jonathan, David Cross saved the especially brutal (and verbal, its probably worth noting, though I can’t speak for what he does in his down time) beatings for the various religious organizations that “annoy” him, reading from the “Ask A Rabbi” portion of his book, I Drink for a Reason. Dear David Cross, please teach me to be funny when I’m angry. Right now I’ve only got the angry part nailed down, and it really makes family functions uncomfortable sometimes. Also, you should hang out with my dad.

Then he took his pants off and demurely kissed pantsless Jonathan Ames, of course. 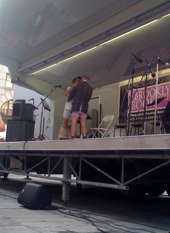 Coulton closed with a cover of “Baby Got Back,” which tied in nicely with the whole pantsless paddling theme. We love it when that happens.