It started in 2001 with Erika. She had this bag and it was…exceptional. Leather, falling apart at the seams, beat up like a baseball mitt, a top flap that flops and thick, moroccan style stitching. I wanted it. I had to have it. She bought it at INA, the consignment store. The one they had, Erika now had. I’d never find it. When The Clown and I ran away to Europe with the Cirque du Soleil for a year, I saw a version of Erika’s bag in a store in Madrid, but it wasn’t the same. It was stiff leather, not structured and floppy at the same time. The store owner had plucked it straight from a Berber Bag assembly line. It was the bag, but it wasn’t the bag at all.

Then, this past year, I was walking in my neighborhood in Fort Greene, at this festival, when I saw a guy wearing the bag. His was beat up, perfectly worn in and I followed the bag through the street fair. When he stopped in front of the essential oil vendor, I stopped and asked him where he got his bag.

“So you could make another?”

“No, you don’t understand. I want that one. I want yours.”

I don’t know what possessed me, it was as if he were wearing my bag, as if he had stolen my bag and I was trying to be cunning to get it back from him.

He looked around, to see if anyone else was listening, to see if he was the only one who thought I was insane.

“What do I do with the stuff in my bag?”

“We’ll get you a plastic bag and put everything in there.”

He thought for a minute and then said, “Okay. Let’s do it.”

So we went to the ATM, I took out $100, we asked the deli guy for a plastic bag, the guy dumped the contents of his bag into the plastic bag and handed me the leather bag.

And I have. It’s my favorite bag. 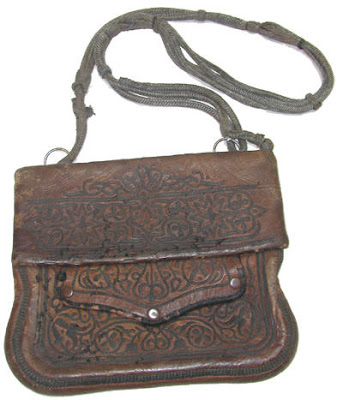