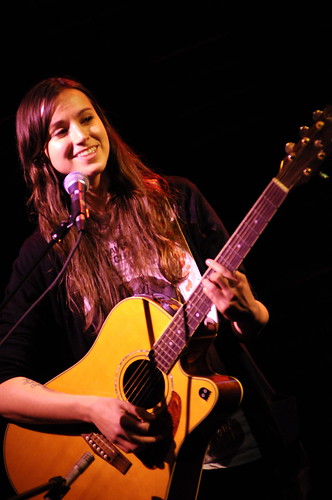 GLC_7567, originally uploaded by HERS Photo.

Holly Miranda comes out to play on Feb 10th. She steps onto the stage and all the hetero boys start paying attention – real, close, careful attention. This girl is hot damn, they’re thinking. She plays a song and levitates even the soulless souls up in the air. At the end of the song, Holly leans into the mic and says,

“So I was in Amsterdam getting interviewed by some guy who clearly hadn’t read my bio. He asked me if all my songs were about my high school boyfriends and I said, well – I dropped out of high school and I’m gay.”

Seems men not only bypass Holly’s pert details as they appear on the page, they also don’t listen when she says it. Afterwards, about ten men come up to me in staggers to ask about Holly’s availability. I have fun telling them that out of all of us, I’m the gender she prefers. We all look over at Holly, surrounded by people wanting to catch a bit of what she has and I turn back to my little coven of boys staring at her and think, “What a funny position to be in. All these men wishing she were straight while I suddenly and momentarily wish I were gay.”