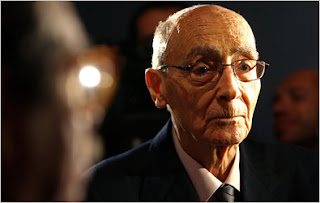 Fernanda Eberstadt – who wrote a fantastic book called, The Furies – wrote his obituary. I thought that was a nice touch. The below factoid might give hope to those novelists who didn’t make the “20 under 40” cut-off and were mildly enraged by Sam Tenenhaus’ article, “How Old Can a ‘Young Writer’ Be?”

As a professional novelist, Mr. Saramago was a late bloomer. (A first novel, published when he was 23, was followed by 30 years of silence.) He became a full-time writer only in his late 50s, after working variously as a garage mechanic, a Welfare Agency bureaucrat, a printing production manager, a proofreader, a translator and a newspaper columnist.