Big Hassle Media has a special place in my heart, not just because they manage and publicize some of the best working artists today, but because one of their artists, Matthew Caws of Nada Surf, played the premiere show of Happy Ending when it launched at Joe’s Pub. In other words, I sort of lost my virginity to them, but don’t let them know that because I totally acted like I knew what I was doing.

One of the musicians they’re working with right now is Cate Le Bon, who lives in Cardiff and only writes in the dark. Not only is her music layered and lyrical, but she rocks the best bio ever written. Ever. 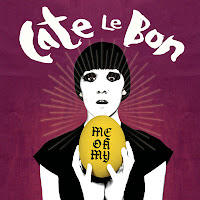 Plus, she’s hot and smart, which would be irritating if her hotness and smartness were inauthentic, but it’s not. Her work is driven by the profound affect a string of pet deaths had on her as a child. It’s this fixation on death that drives her dark, deeply felt music and it’s also an aspect about her work, and her character, to which I over-identify. Doesn’t the trail for everything we wrestle with now wind all the way back to our childhood?

Anyway, she hasn’t played Happy Ending, but we’re big fans of hers and think that you should be, too.  Here’s a crazy, cool, wild and mildly upsetting video for her song, “Hollow Trees House Hounds.” 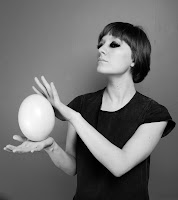 Her album Me Oh My was released in the US  in May via The Control Group (El Perro Del Mar, Wildbirds & Peacedrums).

But, don’t just take my word for it. Here’s what others had to say about her and Me Oh My…

“Her odd, beautiful songs burrow like furtive woodland creatures to a safe nest lodged firmly between tradition and individual talent. Quirky psychedelia, rough guitars and spectral shanties are drawn together by her cool, Welsh Nico vocal… Cate Le Bon is very much her own thing.” NME – 8/10
“A strikingly different prospect to the recent run of new female singers”
The Independent
“Startlingly original… ‘Me Oh My’ has that can’t-put-your-finger-on-it oddness that makes for great pop music… A singular talent” MOJO– 4 stars ****
Or, just check out her Myspace page and judge for yourself….