You give me fever

Last night’s Happy Ending Series was a smash hit. I was in slow motion with fever and when friends said it was the most mellow they’d seen me, I took that as an insult, although today I realize it wasn’t an insult, not even a compliment, but perhaps a…request? Alas, the fever has broken. The regular photographer couldn’t make it, so I’ve nicked some photos from the world wide google instead. (Except for the one of Lou Reed and Guy Lesser – Gillian Crosson – the regular Happy Ending photog took that).

Andrew Vladeck’s banjo wouldn’t plug into the sound board so he played in front of the microphone which gave the night a sort of living room salon feel, which was nice.

Chris Adrian read from a dark, political children’s book he wrote (9/11, slaves, Bush) and then read a poem he wrote about wishing he was a dog. The poem was so sad and sweet it made me wish I was his dog. Or that he were mine. Or that he had brought his prescription pad and written me a script for happy pills.

Steve Toltz read from his buzzy debut, “Fraction of a Whole.” Then, he told us a story about being a parking PA on a movie (I job I had once on “Frankie and Johnny”) and in the boredom of waiting to place the orange cones (I’m so Jewish I almost wrote Cohens) on the street he taught himself the mouth trumpet. He’s quite good, actually. Might try and get him as the musical guest next time. In his entourage — everyone from America’s Next Top Model? He was surrounded by leggy bombshells.

Margot Livesey (Margot I lovesey) read a story involving theft and wooing. Then she told us a story about how she used to want to be a nun, but more than a nun, a nun who walks on water, a nun whose dog she taught how to speak English. It was charming and funny and I lovesey her. 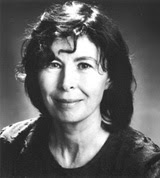 Nathan Englander and Rivka Galchen were in attendance. As was Laurie Sandell, whose graphic Novel, “This is Mt. Rushmore” comes out next year. Almost as heavy hitting an audience as when Lou Reed and Guy Lesser were there. 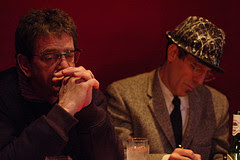