Total Eclipse of the Dead 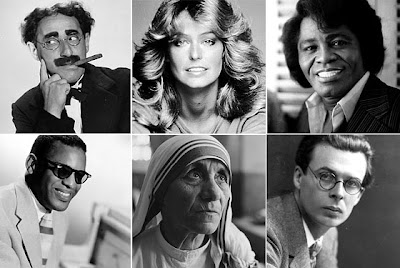 Poor Farrah Fawcett. A month ago, People magazine’s Larry Hackett admitted to the Times that she only had one remaining chance for some friendly press:

“At this point, Farrah has to die,” he said. “It’s the only cover left for her.” Needless to say, she’s missed her chance. Having vanished from the headlines after Michael Jackson’s sudden demise, Farrah is just the latest to join a peculiar group: the Eclipsed Celebrity Death Club.

The classic ECD example is Groucho Marx, who passed away the same week as Elvis Presley, and thus missed out on a good week’s worth of TV tributes. But the easiest way for a famous person to vanish from the earth without so much as a blip is to follow a president of the United States. Ray Charles caught barely a moment’s coverage when he died in 2004, right in the middle of the weeklong blanket coverage of Ronald Reagan’s death and funeral. Same story for James Brown, who got some press but definitely ran second to Gerald Ford. (The only person who could square off against a dead head of state, it seems, was Mother Teresa. When she died a few days after Princess Diana, a good deal of the coverage tried to frame them as comparably angelic figures.) And don’t forget Alice Trillin—granted, not a worldwide celebrity, but a beloved figure to her husband Calvin’s thousands of New Yorker-­reading fans. While awaiting a heart transplant, she died on September 11, 2001, following the horrible deaths of thousands of New Yorkers. Most of her husband’s readers only learned about it many months later, when he published About Alice.

The championship trophy for badly timed death, though, goes to a pair of British writers. Aldous Huxley, the author of Brave New World, died the same day as C.S. Lewis, who wrote the Chronicles of Narnia series. Unfortunately for both of their legacies, that day was November 22, 1963, just as John Kennedy’s motorcade passed the Texas School Book Depository. Huxley, at least, made it interesting: At his request, his wife shot him up with LSD a couple of hours toward the end, and he tripped his way out of this world. Which, if you’re going to go to your reward without anyone’s noticing, is probably not a bad way to end it all. — Christopher Bonanos

The Day I Became A Tabloid