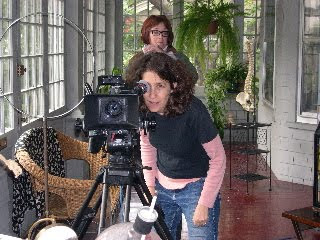 FROM THE RELEASE…
“Working since the mid-1980s, variously on lyrical shorts and long-form experimental documentary, Lynne Sachs has explored the relationships between individual memory and experience in the context of large historical forces. Foregrounding personal history and autobiography, Sachs exalts the intimate gesture as perhaps the most heroic of poetic and political acts. With a keen grasp on cultural theory and media history, Sachs’ films celebrate life and mindful political engagement, presenting complex pictures of the world with lyrical grace and even joy.”
–Steve Polta, Artistic Director, San Francisco Cinematheque

NYC Premiere! Music by Argentine singer Juana Molina.
“Inspired by the writings of Julio Cortázar, [this] is an experimental narrative that explores the interior and exterior worlds of four early-teenage girls (including Sachs’ daughters Maya and Noa Street-Sachs) in Buenos Aires, and how through play they come to discover themselves and their world. ‘Freedom takes us by the hand – it seizes the whole of our bodies’, a young narrator describes as they head towards the tracks. This is their kingdom, a place where the girls pose as statues and perform for each other and for passengers speeding by. Collaborating with Argentine filmmakers Leandro Listorti and Pablo Marin, Sachs offers us a series of magical realist vignettes using a collage of 16mm, 8mm, and video. Sachs and co-editor Sofiá Gallísa construct a bilingual work that places equal value on the intimacy of the girls’ lives and their growing awareness of those social forces encroaching on their kingdom.”
-Carolyn Tennant, Media Curator, Hallwalls Contemporary Art Center

“The film moves from childhood’s earthbound, cloistered spaces into the skittering beyond of adolescence, exploding with anticipation and possibility.”
-Todd Lillethun, Program Director,  Chicago Filmmakers

“While (the girls’) lives are blissful and full of play, the political and social unrest of contemporary Argentina begins to invade their idyllic existence. Sachs’ brilliant mixture of film formats complements the shifts in mood from innocent amusement to protest.”
–Dean Otto, Film and Video Curator, Walker Art Center

THE LAST HAPPY DAY 2009, 38 min.
An experimental documentary portrait of Sandor (Alexander) Lenard, a Hungarian medical doctor and a distant cousin of Sachs. In 1938 Lenard, a writer with a Jewish background, fled the Nazis to a safe haven in Rome. Shortly thereafter, the U.S. Army Graves Registration Service hired Lenard to reconstruct the bones of dead American soldiers. Eventually he found himself in remotest Brazil where he embarked on a translation of WINNIE THE POOH into Latin, an eccentric task that catapulted him to brief worldwide fame. Sachs’s essay film uses personal letters, abstracted war imagery, home movies, interviews, and a children’s performance to create an intimate meditation on the destructive power of war. (Premiere, New York Film Fest, 2009)

“A stunningly beautiful essay film in which (Sachs) uses the remarkable story of her distant cousin … as a lens for her meditations on trauma, survival, history, and healing.”   See entire review at www.filmthreat.com/reviews/24395
-David Finkelstein, Filmthreat.com

“A fascinating, unconventional approach to a Holocaust-related story … a frequently charming work that makes no effort to disguise an underlying melancholy.”
-George Robinson, The Jewish Week

THE TASK OF THE TRANSLATOR 2010, 10 min. Sachs pays homage to Walter Benjamin’s essay “The Task of the Translator” through three studies of the human body.

Watch while you wait