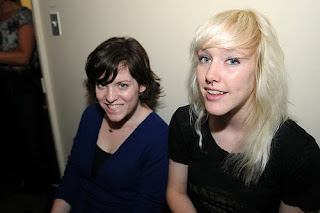 Sweet damn last night’s show was good. Way to take it to the next level with your risks, readers. In case you missed out, last night was Graphic Book Night here in HERSworld, which meant a lot of powerpoint and very little stress for me because everyone had a pre-soundcheck soundcheck. Sweet! Really, my only job was exposing Amanda’s whole “conscientious student” routine with some hard (/dreadlocked) photographic evidence. So busted.

Laurie Sandell read from her new book, “The Imposter’s Daughter,” as well as from her college essay, which was one of the funniest things I’ve heard in a long time. Back in the greenroom before the show, Laurie described it as “incredibly pretentious,” but that really doesn’t do the essay justice. I wish I could remember a few choice sentences, but the only memory I have of it now is the sound guy laughing so hard next to me that I missed whatever came between “throbbing fingers” and “my creative process.”

Chip Kidd, if this whole “graphic design” thing doesn’t work out for you, there’s always a career in reading comic-books-on-tape. Folks, you really haven’t understood Robin as a character until you’ve heard him read as so fey it should probably be called “Batman and Tufted Titmouse.” In the same regard, you really haven’t felt Radiohead until you hear Chip Kidd do an acapella cover of “Let Down,” the kind of cover that would make Thom Yorke blush (though one gets the sense it wouldn’t take much).

I feel a little bad because Brian Selznick said he was kinda’ worried that the dance routine that followed his reading might overshadow the reading itself, and, well, I really just want to talk about the dance routine. Yes, The Invention of Hugo Cabret was completely engaging, the illustrations gorgeous, but by the end all I could think was, “Did he sew the gold into those hotpants himself?”*

As for the music, if you were aimlessly driving around America trying to figure your shit out and you pulled over at some sad, grimy dive in like, Arkansas, with six people who never leave their barstools and Amy Correia was on stage singing that song about city girls (OR COVERING RHINESTONE COWBOY: BRILLIANT), you would probably start sobbing and reconsider everything and wait around to tell her your life story after the set was over, and she would totally listen.

But instead you went to Joe’s Pub and saw her there so you’re going to go home and pre-order her new album to fund it, right? Right!

*alas, it was gold tape.

I was a saint in high school!

Backstage ain’t always what it seems…