Often you say goodbye to your childhood home when you’re younger, but as a third generation native, Manhattan-ite, my family tends to stay put in the apartments and houses they bought in the 20th Century.

My mom bought her townhouse on MacDougal Street 37 years ago. It’s the only home I’ve ever known. Its served as the central hub for me, my friends, my family (and to be fair – some strangers) my entire life. The house on MacDougal Street wasn’t just a home to me – it was a home to everyone. We were, and are, a social family. We hosted dinner parties, holidays and birthdays, for any, and everyone. The more, the merrier.

For reasons that aren’t good ones, my mother has to leave, and has three weeks to pack up 37 years of hers and our, life. I’ve lost a few people already this summer, and losing this house, is too big a grief for me to truly feel. It’s only when I hear and see the reactions of a few close friends who understand what losing this house means, that I am able to feel tiny waves of searing loss.

I grew up in a secret garden community. Twenty-two row houses in all (eleven on MacDougal Street, eleven on Sullivan) and in the middle, a huge communal garden. This isn’t a place you leave. Once you’re there, you’re there. All the families I grew up with still live there, and all of us kids, now grown, still visit our parents there, still make use of the garden. But now, that’s about to end, and packing up that house and saying goodbye has left me feeling asymmetric and rootless. 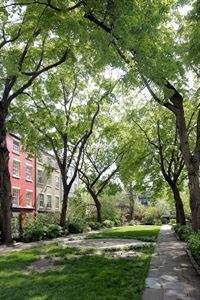 Finding notes and letters from people and times that no longer exist can compromise your equilibrium, changing the conditions in which you receive information. Your world (well, mine at least) unpools as some type of technical glitch – accelerated stop motion.  I came across letters my late stepfather wrote me when I was at camp, old slides I hadn’t known existed, and journal entries about my best friend Melissa, who died when we were both 8. Everything has extra weight and meaning now, but some things can get right to the point in only 3 short sentences.

I am six. I will never be five again. That’s what Melissa told me.

Oh Yaddo, I Miss You.