Veteran and upcoming Happy Ending author (and pdgf — that’s my acronym for pretty damn good friend), Laurie Sandell gets an awesome Publishers Weekly review. They forgot to add the star, but I didn’t! 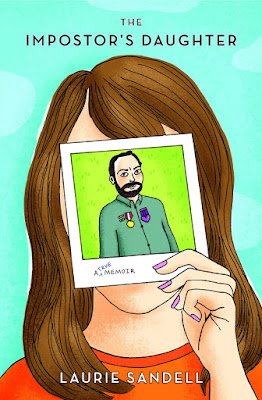 In this delightfully composed graphic novel, journalist Sandell (Glamour) illustrates a touchingly youthful story about a daughter’s gushing love for her father. Using a winning mixture of straightforward comic-book illustrations with a first-person diarylike commentary, Sandell recounts the gradual realization from her young adulthood onward that her charming, larger-than-life Argentine father, bragging of war metals, degrees from prestigious universities and acquaintances with famous people, had lied egregiously to his family about his past and accomplishments. Growing up with her two younger sisters and parents first in California, then in Bronxville, N.Y., the author records signs along the way that her father, a professor of economics with a volatile temperament and autocratic manner, was hiding something, from his inexplicable trips out of town, increasing paranoid isolation, early name change from Schmidt to Sandell, to massive credit-card fraud. Interviewing her father for her first magazine article, the author resolved to check his sources and even flew later to confront his past in Argentina, only to discover the truth. Feeling betrayed, guilty for exposing him and mistrustful in her relationships with men, Sandell numbed herself by abusing Ambien and alcohol. Her depiction of her rehab adventure is rather pat and tidy, and she does not address the notion that her own creativity might have sprung from her father’s very duplicity. However, Sandell’s method of storytelling is marvelously unique and will surely spark imitators. (July)

Practice and All is Coming