Let’s All Help Make a Movie 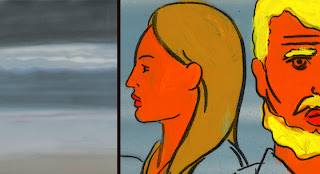 Filmmaker and Happy Ending Alum John Cameron Mitchell (Rabbit Hole, Shortbus, Hedwig and the Angry Inch) needs our help to do something awesome! Mitchell and his team have launched a Kickstarter appeal for “The Ruined Cast,” an animated feature he’s producing with Howard Gertler, to be directed by rising graphic novelist star Dash Shaw (Bottomless Bellybutton, Bodyworld, the comic art in Rabbit Hole), whose hand-drawn images star in the film. Click the jump for complete deets (for instance, if you donate at least $5 you’ll score some art by Dash), and to see more striking stills from “The Ruined Cast.”

“The Ruined Cast,” which is writer Shaw’s first feature-length animated film, boasts a brilliant script, which Mitchell describes as something like a a Philip K. Dick/Simpsons hybrid. 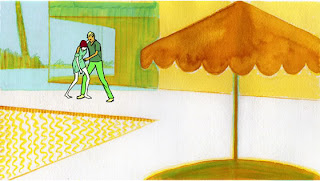 So…slapstick science fiction with art students, human guinea pigs, and epic cases of deja vu? With totally cool, one of a kind artwork to boot? Yes please. I mean, it’s basically as if all the best parts of graphic novels and all our favorite childhood cartoons flew to Vegas, got married, and then threw the party of the century to celebrate. The project is a true original and so unlike anything else that’s already out there, and these guys need some Kickstarter love so they can finish the film and prove to production folks that this is something worth nurturing, and then releasing into the wild. 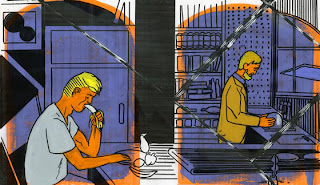 Mitchell, Gertler and Shaw need to raise 25k for development (animatics, clerical, casting, etc) so they can get to the next level of actual financing, and they need to do it by May 8. That’s less than a month! Plus, just a $5 donation will get you some Dash Shaw art of your very own, and more money gets ya more goods. Click here for more info and an animation demo. And don’t forget to spread the word after you donate!

And if you’re the type who likes to get in the giving mood, stay tuned for news of a Happy Ending Kickstarter Campaign! We’re just jonesin’ to produce even more exciting content and programming (bigger! better! more often!) for our fans, but we’ll need a little love to make it happen!