When we last left our Aktionista, Lisa Dierbeck, she was seeming a bit adrift.  She’d tried to sell off some beloved books, but no one wanted them.  She came up against the temptations of apathetic luxury and wondered what she would do, were she a true revolutionary.  We didn’t have an answer for her.

Fortunately she had one for us–take more Aktion!  She returned to the streets, channeling Viennese Aktionist Rudolf Schwarzkogler (some of whose photos Lisa drew on for inspiration seen here), and took part in a series of symbolic performances, the implications and meanings of which she explores in the following guest post.  Click through the link to read on! 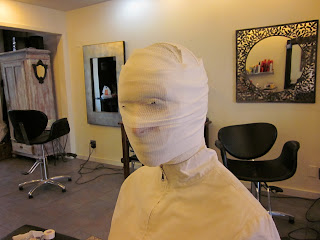 2nd Aktion for a Dying Book Biz on the Verge of Bankruptcy: A Report

I staged an Aktion on Wednesday January 5th, 2011 – becoming a ghostly, bandaged entity in white, roaming the streets of Manhattan in a costume created by a psychotic Austrian artist who died 42 years ago after taking one too many risks.

I stared at myself in the mirror and watched my face disappear beneath the white gauze wrappings. I was turning into a sculpture at the hands of costume designer and stylist Peggy Milak. She’d studied photographs by Rudi Schwarzkogler (1940-1969), whose dreamlike work I was now reenacting. Intent, blonde, with eyes rimmed in kohl, Peggy’s former task was just to make me into a redhead. This morning, her true talents shone; she pulled my hair taut, like the anorexic ballerina in Black Swan, and made me into a living copy of a 1965 work by Rudi. Now and then, Peggy sprayed me with glue. It stank of chemicals. From behind my veil, I tried to read the label on the spray can. Harmful and flammable. Oh! “Anything for art,” she said, dryly.

Within 90 minutes, I’d been drastically transformed. 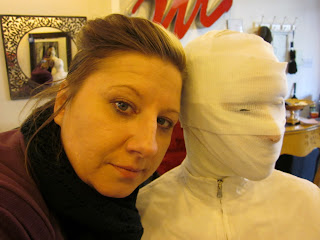 11:30 a.m. As the Creature emerged, I named her Felicia, after a friend of mine who died of a heroin overdose in Vienna in 1978 at age 15.  If she were alive, what would she think?
My eyes, mouth and nose were obscured by gauze; it occurred to me that, among other logistical glitches, I wouldn’t be able to eat.

“Can you see?” Peggy asked. Nope. I shut my eyes while she made two tiny slits in my mask. The original costume – constructed by one of the most mysterious radical artists who ever lived – had no such niceties. His Creature was blind, deaf and dumb. An hour and a half in, I’d abandoned the Aktionists’ extreme purity. I realized why Rudi – practical if crazy – had confined his Creature indoors, never leaving his apartment. It would bump into things! I stared at myself through my ineffective slits. My head looked otherworldly and disturbing, yet weirdly beautiful, if I do say so, with its long neck and elegant line. Who knew? Without any features left, a new part of me came to light: it was regal. I resembled the majestic sculpted head of Nefertiti on display at the Metropolitan Museum of Art. Admiring the costume, Peggy and the stylists surrounded me. “Oh, wow,” said Peggy. “You look so great and scary. I feel like you’re becoming…”

What? None of us knew. I began the 2nd Aktion with nothing more than questions scribbled in a notebook. Here is a sample from my list:

What is the difference between a writer and an artist?


What is the difference between art and advertising?


Am I doing this “to publicize” my novel, as a reporter said? If so, does that make it cheesy and
stupid? If not, then why am I doing it?


What does it mean to get recognition?


What does it mean to be invisible?


What does it mean not to have a voice?


What is it to be revealed after being concealed?

No breath = not good. Using a nail scissors, Peggy carefully made two punctures in my bandages, one beneath each nostril. “It’s like capturing a firefly and putting it in a jar,” we agreed. “You have to make holes in the lid so the bug has enough air.” There was something insect-like about the Creature. As I tested out the costume, taking my first uncertain steps across the floor, I found myself moving in slow motion, swiveling my head from side to side like a praying mantis.

“Good luck,” said Peggy, snapping a photo. Like a kid on Halloween, I put on my winter coat and hat reluctantly, sad to dilute the full effect of the costume. As I left the salon, I stared up at the open sky and made a vow to assorted T.B.D.’s, talented-but-dead people.

“I’m trying to take Aktion,” I whispered. “I don’t know what the hell I’m doing here. From this moment on, I take a vow of silence. I will not speak a word until sunset.”

Off I went. Throughout the day, I took a series of Aktions to rescue books. I only have room here to report on one of them!

The Creature in white bandages (mummy? hospital patient? cocoon?) walked into the store, aware that the eyes of the clerks were following her. She took one step at a time, in a processional march, stately and formal: a high priestess from a lost civilization entering the temple ruins. She performed an invented ritual: the Bandaging of Injured Books. First, she stood before the big, black Stephen King Compendium and, in slow motion, bandaged it. She wound four successive layers of gauze around the book’s stiff cover, just as she had been bandaged herself, hours before. She placed the bandaged volume back on the shelf, clasped her velvet-gloved hands in prayer, and bowed. She approached a biography of Alice Neel and wrapped it tightly in lengths of gauze, purchased at considerable expense at Duane Reade (This shit costs a bundle!). She sidled over to a book by Tolkein. She began to bandage.  Through her puny eye holes, she gleaned that the book was not written by Tolkein. It was a Tolkein “companion.” So… All around were books that were not books; books that were toys and games and gadgets and novelties and assorted products. Whatever it was, it got bandaged.

By 5:00 pm, I was standing in front of a stone god in the Metropolitan Museum’s Egyptian wing while a crowd of children watched the mummy. 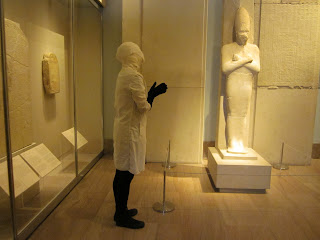 I’d covered four miles and had performed five hours worth of Aktions. My own book was the last one to be bandaged. I placed it there, at the foot of a lost deity, hoping it might get resurrected, too, along with the eternal Soul of the Book. I was thirsty, hungry and exhausted when I ran into the nearest bathroom, pulled my scissors out of my bag, and tried to cut off my bandages. They were stuck fast. Fuck. The glue! For a moment, I panicked, half-strangled, with fabric and adhesive clumping to my hair and neck. I snipped and tore; finally, I escaped. The air was cool on my skin. My face was pale and drawn. I felt a bit stronger and braver. It was only then, as the 2nd Aktion was completed, that I figured out what I wanted to become. An artist. One question, anyway, was answered. The Aktion for a Dying Book hasn’t ended; it has started.

A New Beacon to Light the (Artsy) Way