In her last post, Lisa Dierbeck announced a call to readerly arms with an invitation to Mischief + Mayhem’s first ‘action’ outside the Union Square Barnes & Noble on December 7th.  A surprise, not-exactly-covert reading to take place in the bitttttter cold, hopefully attended by some brave and bundled and red-corsaged fans.  So how did it go?  Did a nervous B&N employee kindly ask them to leave (before asking if they’d all like to sign up for the rewards program to get 10% off)?  Did whoever was reading inside B&N that night dump ice water on them from the 2nd story?  Did the nearby Petco kittens attend?  Read on after the jump to find out!

“Scarecrow (code name) and I felt scared. We got emails all day saying: “We don’t want to come; what you are doing is illegal and we don’t want to go to jail!”

CONT: Action for a dying book biz on the verge of bankruptcy:
True tales of Mischief + Mayhem, a new alternative press
determined to rescue the spirit of the Book
and publish daring, edgy, surprising novels (by crazy people with delusions of grandeur).
PART II

Welcome to My Top Secret Diary, taking you behind the scenes of Mischief + Mayhem Books to chronicle the inner workings of a small, shadowy enterprise poised to overturn the publishing industry. We are a raggedy band of Outsider artists sassy and delusional enough to battle for the soul of the American novel and fight Goliath!

Just two months old, Mischief + Mayhem is a band of five grandiose, battle-scarred authors, published by fancy places like Farrar Strauss, Knopf and HarperCollins. In a quest for greater artistic freedom, we just up and started our own publishing company. Instead of an office, we have a kitchen table. Instead of a business plan, we have vodka. Instead of cool-headed professionalism, we have heated arguments, cursing loudly in public last week in a members-only private club in Manhattan (me) and (me again) crying.

Despite our drama-queen ways, we share one belief: publishing in 2010 has gotten disturbingly conservative. Today, editors and agents are interfering in the creative process – capitulating to commercial pressures so extreme, they’re crippling. Instead of succumbing, writers are defecting to launch an underground resistance movement. Mischief + Mayhem has staged a revolt against formulaic plotlines, homogeneity and business as usual. We’re tired of writing for The Man. In the digital age, we’ve resolved to resurrect the Glory of the Book – the novel as a colorful organism full of spikes, warts and edges, not a sleek, predictable commercial product.

On Tuesday, December 7, we staged our first Action for a Dying Book Biz on the Verge of Bankruptcy, inspired by that über-daring, risk-taking art group, the Viennese Actionists — the most vehemently anti-war and anti-commercial artists in history. Our Action was far more polite, without any trademark Viennese nudity or blood. Though we try to live up to our headlines (“The Book Industry’s New Danger Brigade”), we are only shy, timid writers. Mustering our courage, we planned a guerilla reading at 6:30 p.m. sharp. We Mischief-makers had our hearts set on storming the fortress of the Enemy – the Union Square Barnes and Noble. We instructed fellow publishing revolutionaries to signal us by wearing red flowers in their lapels. We were plotting to take on a corporate ogre whose policies have harmed the Book we love.

Scarecrow (code name) and I felt scared. We got emails all day saying: “We don’t want to come; what you are doing is illegal and we don’t want to go to jail!”

We couldn’t figure out what would be illegal about gathering in a bookstore and reading outside of it, but the nervousness was contagious! We sat quietly in a dark apartment drinking hard liquor! Our lawyer sent a cautious message questioning the use of the word “bankrupt”! (Yes, we have a lawyer!) We lobbed heated messages about the First Amendment and the right to free speech. I stuck with “bankrupt” and held my breath. Meanwhile, vain and fading, I readied myself for my close-up. I trekked to my favorite artists-run hair salon, Le Petite Chandelier on industrial-chic Third Avenue in Brooklyn, where the Hair Whisperer styled my hair. (I was too ashamed to confess that I’d done this, but now, for My Top Secret Diary, I will.) Donning the all-black Converse sneakers that I’d fallen for, like any gullible consumer, because they were labeled “The Outsiders,” I threw on my costume – red headgear with earflaps, puffy coat, red carnation – and awkwardly maneuvered a six foot sign around Manhattan, up and down stairs, in and out of the C and A trains. A gift from the Scarecrow, it’s D.I.Y. advertising for my freshly-published second novel, THE AUTOBIOGRAPHY OF JENNY X, released on November 30, 2010. The giant sign flaunted our writer-designed book jacket constructed, literally, of string and duct tape.

I lugged my beautiful sign to Mischief + Mayhem headquarters, where Scarecrow and I had an attack of stage fright. We gulped down generous portions of bourbon from elegant crystal glasses – Scarecrow’s wedding presents. As always, I wrestled with my divided self – the misfit artist, at war with the successful middle class professional that I may or may not be, the one favored and rewarded by our families, and by New York City. Scarecrow adjusted his tie; I applied lipstick. We fretted. What if no one showed up? What if they stayed home because it was bitterly cold? What if we really were arrested or, worse, humiliated?

What the heck, nothing to lose. Off we charged to Union Square, hopping a taxi after wrestling with the Inner Diva (Scarecrow’s) and the Inner Princess (mine). We arrived at Barnes and Noble and cased the joint. NOBODY WAS THERE. That is to say, customers milled around but NONE WERE WEARING THE RED FLOWER. We had no supporters. We were alone.

And then, just as we began to lose heart, a tiny cluster of revolutionaries appeared, lurking subversively near a display of greeting cards. We tentatively offered a carnation to one likely suspect, a clean-shaven fellow dressed nattily in a long wool coat. Like us, he looked awfully respectable – except for his eyes: dark and sparkling. Incognito?

“Would you like a red flower?” we asked, uncertainly.

“Yes, thank you, I would,” came the reply. Shyly, we slipped the slender green stem into his buttonhole. He nodded encouragement. He was on our side.

6:29 pm. We streamed out into the street, a sprinkling of writers, readers and, wow, even reporters. The Good Witch, in drag, in a leather jacket and black watch cap, held my sign aloft and winked at me conspiratorially. Scarecrow gave a rousing speech in the frosty wind. I read two pages aloud from JENNY X, shouting to be heard against the traffic. I tried not to compare our audience of 35 to the audience of 150 at my debut reading INSIDE Barnes and Noble, seven years ago. A photographer snapped a picture; I emulated Divine in Female Trouble, vamping it up for the camera. My moment in the spotlight arrived.

And passed, in minutes. Trudging back to headquarters, I cradled my novel to my bosom like a fragile infant in a hostile, wintry landscape. The poor Creature is being born at a moment when books are on the Endangered Species list. What will happen to little JENNY X, just one week old and already world-weary, jaded and sophisticated, “psychologically taut…beguiling…sly and sharp” according to the New York Observer? Will she disappear or triumph? After years as embattled, bohemian writers, what will happen to us, and, um, to me? We’re poised on a precipice here, pal. To find out, tune in to My Top Secret Diary next week.

And check us out on www.mischiefandmayhembooks.com. Visit our parents while you’re at it, the feisty www.ORBooks.com.

For a more objective report on the Action at Barnes and Noble, see The New York Times…

We’re scheming up something scandalous for next time. It takes a lot of nerve to rebel. Come join us; we’re mousey renegades who can use some help! Don’t forget to wear a red flower or, if someone offers a carnation, to take one. 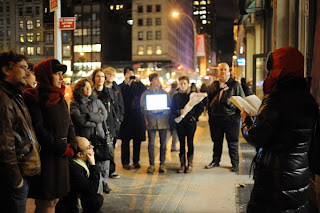 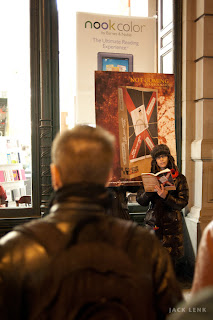 Lisa Dierbeck is the author of two novels, The Autobiography of Jenny X and One Pill Makes You Smaller.  She is a founding editor of Mischief + Mayhem. Visit mischiefandmayhembooks.com for more details.

"A Novel Shopping Experience" with WORD