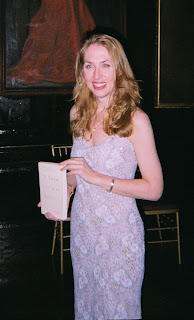 We are thrilled to announce Alethea Black as our first guest blogger of the current Happy Ending season. Black’s debut collection of stories, I KNEW YOU’D BE LOVELY (Broadway Books/Random House), was an Oprah.com book of the week, and is currently a Barnes & Noble ‘Discover Great New Writers’ pick. Black also plans to turn in a copy of her debut novel today, if she can ever stop emailing (stop emailing, Alethea!). Those hoping for a sneak preview (and you certainly should be) can come hear her read the first chapter at Cornelia Street Cafe, Monday September 26, at 6:00pm. Wine, indeed, to follow.

Click the jump for Alethea’s guest post, a meditation on craft that explores a magical breed of freedom, which a writer can only achieve through exercising a magical breed of restraint. It’s also about another type of exercising, with which Alethea is now pretty intimate thanks to what happens when you plug her not-so-common name into a YouTube search. Enjoy the piece, and the, ahem, titillating video, which stars another, although also pretty talented, Alethea. Some adult content, so, you know, take care when clicking the link.

AN UNTAMED SENSE OF CONTROL
by Alethea Black
Oddly enough, there’s a pole dancer who shares my name, so if you search for ‘Alethea Black’ on YouTube, you’ll get a video of a woman doing this…dance. I found this out because a couple of people have come up to me and said: “Um…do you…do anything to make money besides writing your short stories?” I enjoy their sheepishness. I watched the video myself, of course, and I wanted to go back to these people and say: “Are you serious? You thought that was me? This is the happiest day of my life.” I don’t want to ruin my mystique for anyone, but I am a woman whose arms get tired when I have to unscrew a light bulb from a ceiling fixture. I don’t even think I’d get the questions right if there were a pole dancing quiz. Can an object at rest suddenly and spontaneously spiral up a pole? Uh, no? — and the mere fact that I’m thinking of pole dancing in terms of physics should tell you something — Can a woman perform serpentine feats of athleticism while wearing ten-inch heels and an outfit made entirely of plastic? Again, I’d have said no. But I would have been wrong. So wrong.
I was thinking about her recently, my pole-dancing namesake, because I was teaching a class on writing, and we were discussing restraint. It’s amusing that I would have been lecturing on restraint, because it was a desire to be unrestrained that brought me to writing in the first place. By the time I was in my mid-twenties, I was already fed up with the little cages of convention the world was offering me — one of my college summer jobs had been working for a bank — and I fell in love with the idea of space governed by abandon and freedom and utter candor: glory-hallelujah-yes. In life, I thought, we can be coy, we can play our games, we can wear our masks. But here’s where we take our clothes off and tell it like it is. In fact, when I first started out, I was so taken by Annie Dillard’s advice to “give it, give it all, give it now,” that one evening when I attended an awards ceremony at which a poet was being praised for her restraint, I found myself thinking: “What the hell is restraint?”
It will come as no surprise to you that my very favorite writers have always been the live-wire acts who not only race to the edge of the world, but jump off — people like Denis Johnson and Frederick Seidel and Will Eno. You want to sit down and make polite conversation about the weather over tea? You are not for me. For me are the eaters of the marrow, the hunters of the heart, the asylum escapees willing to drive all night in a stolen car to get to the promised land. I’ve been long drawn to the writers who risk it all on the page. What it took me a while to realize was that these outlaws are also masters of restraint.
Exhibit A, from Eno’s play Thom Pain (based on nothing), with stage directions in italics:

He did not love too much, nor too well, but with too much sweat, shit, and fear, with too many long words, too many commas, (Brief pause.) It seems. (Brief pause.) May every animal find its animal. Find some food, its fellow animal, a warm rock and somewhere dark to sleep.

He is solemn, and, though still restrained, more vulnerable than we have previously seen.

The best writers are those in full possession of their own wildness. And by that, I mean they know how to control it. This was the greatest lesson I learned about writing, and the one I keep learning. You think that fireworks display was put on by a teenager with a match and some cheap explosives? Think again. If you want to create something unabashed and powerful and exquisite, it’s as much about what you don’t say as what you do. Storytelling — originally an oral, performer’s art — is about timing. It’s about achieving grace through self-mastery. It’s about knowing when to hold back and to release.

Mini update of no significance