From Megan, the intern.

Megan and Kayla are my amazing interns. Kayla writes the post-show breakdowns and impressions and Megan’s gotten on board, too. Here is Megan’s first post! This was written after CONFESSION & JEALOUSY night. I think she did great! 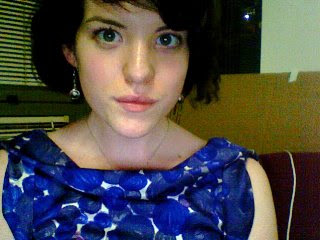 Several Confessions, and Some Jealousy

This is my first post, and I am nervous. I am so nervous that I just looked back through nine billion blog entries (including Moby, wedding photos, and Amanda comparing herself to Craig Ferguson) just to see Kayla’s first post so I would know how it’s done—now I am jealous and nervous. Great.

First, a confession: backstage at Amanda Stern’s Happy Ending Music and Reading Series, I cannot hear a thing.
I’m backstage almost the whole time, except to run into the audience and try not to fall on my face–or anyone else’s–in my quest to whisper sweet nothings into Amanda’s ear—like “it’s 7:45!”

A second confession: before the show, I saw Elvis Perkins shaving his beard in the dressing room, and I honestly thought it was part of his risk. It’s so typical of me and my overactive imagination to attach some weird significance to his beard—“oh my gee, how risky of him to show the world his chin!” [Sorry, Elvis, if your beard actually is a big deal and shaving it actually was a Huge Risk. My bad.]

Nick Laird (Irish-dog-whisperer, indeed), muffled as he was behind thick curtains and a super-heavy sliding door, made me think of Yeats. So I spent most of his set alternating between sneaking peeks at Maud—the cutest dog of all time—and reciting Yeats’ “The Lake Isle of Innisfree.” I could only get through the first three lines—confession number 3: I am the worst English major that ever majored.

And finally, for the record, I never plucked the wings off of a butterfly, but I did accidentally kill a few during my five-minute childhood obsession with Nature. I guess petting butterflies while they’re chilling out on flower petals doesn’t make them want to be friends. So, butterfly-killers in our midst, I want you to know that I totally get it.

I sure wish New York had something like this!