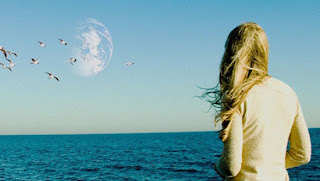 By this point it’s likely you’ve heard some manner of buzz about Mike Cahill’s Another Earth, the new indie film that’s as powerful and ethereal as it is unsettling and tragic. Maintaining such a balance without going off the rails into melodrama or absurdity is quite a feat, but this ensemble of filmakers and performers somehow manage to pull it off with no small amount of grace. Britt Marling plays Rhoda, a girl who kills the wife and child of a Yale composer and then devotes her life to the attempt to atone. As if that weren’t enough, there’s just been the discovery of a new planet, a creepy, looming world that’s identical in every way to Earth as we know it. If that’s not a recipe for tension and emotional crisis, I don’t know what is. But Another Earth stays cool calm and collected throughout, and lets itself unfold as genuinely as possible despite such a sci-fi premise. I won’t say any more, except that there is much, much more, because I don’t want to spoil the experience, but if you’re curious you can read about it at The New Yorker (the full version is available with print and digital subscriptions) and the Times. And, quite clearly, you should just go see it.

Join us at Bard SummerScape

New additions to the HE consignment store