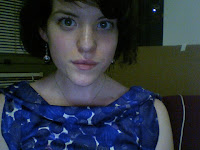 Sitting backstage at Joe’s Pub, listening to Amanda read off a list of possible crises, I couldn’t help but think of a few of my own.

I don’t receive at least two Facebook notifications every 30 minutes: Crisis.
Twitter doesn’t work on the internet or my phone: Crisis.
The temperature dips below 60: Crisis.
When the food on my plate touches the other food on my plate: Crisis.
The New York Times includes every section except the one with the crossword: Crisis.
They’re out of grits at my local grocery store: CRISIS!
Moving to New York after growing up in perhaps the largest cluster of suburbs ever: Crisis.

See? My life is hard, y’all. But at least all these crises make me extra-excited when I find Sharpie pens on sale or get a free slice of cake.

Last week’s Happy Ending was one of the best.

After their amazing set–including a Mellencamp cover(!!!)–Kaiser Cartel is my new favorite local band. I urge you to take a listen, so when your hip friends mention them you won’t have to ask, “Oh, you mean Cartel?” and make the hip friends slap you. I also want to bunny-nap their mascot.

Lauren Grodstein‘s A Friend of the Family was so creepy! After, she risked reading from an amazing postcard from someone she met on what was apparently the kind of Eurotrip that they based the movie on.

Victor Lodato let me hold balloons! If I forget everything else about this night, I will remember that I got to stand onstage holding a bunch of multicolored balloons, while Victor gave a heliumed reading of Mathilda Savitch. Balloons are the opposite of a crisis.

For most of the night, I had been thinking that Paul Rudnick‘s name sounded awfully familiar. There’s no reason why it shouldn’t, since he wrote Addams Family Values and In & Out, among others. But he also wrote, I Hate Hamlet, one of the favorites in my high school directing class–I’m not really sure any of us understood it, though.

This Happy Ending was definitely not a crisis situation—it must have had something to do with the ballooons.

Reviews and things that happen after…

How do YOU Stack Up?