Arthur Phillips Wrote a Song for You.

This just in from Kirkus Review. I added the star, since they forgot to. 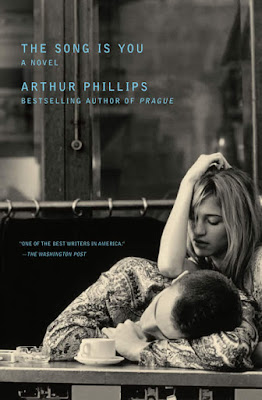 A betrayed husband’s fascination with a charismatic singer is given several intriguing twists in this subtle fourth novel from the versatile Phillips (Angelica, 2007, etc.). As he did in his widely praised debut novel Prague, Phillips focuses microscopic attention on the intellectual keenness and emotional vulnerability of each of his straying, struggling principal characters. Foremost are reluctantly aging director of TV commercials Julian Donahue, still sunk in grieving over his two-year-old son’s death from a mysterious infection; Julian’s estranged wife Rachel, whose own sorrows have steered her into promiscuity; and rising musical star Cait O’Dwyer, a bewitching Irish beauty who has become the darling of dimly lit jazz clubs and college campuses, and whose smoky sensuality brings back to Julian the vocal witchcraft practiced by Billie Holiday in her heyday.

The simplicity of the tensions thus created is then skillfully complicated, as Phillips juxtaposes Julian’s convoluted self-justifying fixation (“He could believe, with Cait in his life, that he could be free and tethered, young and old, joyful and mourning, forgiven”) with a trenchant objective analysis of both his conflicted youth (among a loving and judgmental family) and his destroyed marriage. Whenever we expect it to suffocate in solipsism, this novel’s scope instead widens. Intriguing parts are played by the footloose members of Cait’s touring band, a sinister rock star turned painter (Alec Stamford) and Julian’s older brother Aidan, an autodidact underachiever whose many failures are crowned by his embarrassing appearance on Jeopardy (from which, as it happens, author Phillips retired as an undefeated champion).

The problem is Cait, whose ostensibly irresistible allure is never fully convincing; no more so, in fact, than is her reputation as a soulful songwriter—who, for example, rhymes “keep your distance…[with] don’t leave a witness. (Amanda here — I beg to differ. In other words, they’re wrong on that point. Right on all the rest. Especially the last sentence.) ”Still, the novel’s clashing harmonies seduce and fascinate. And Phillips still looks like the best American novelist to have emerged during the present decade.

Dark Was the Night