Are you a cartoon?

From Michael Arthur’s Blog comes a lovely drawing of John Cameron Mitchell from last night and a really amazing write-up…. 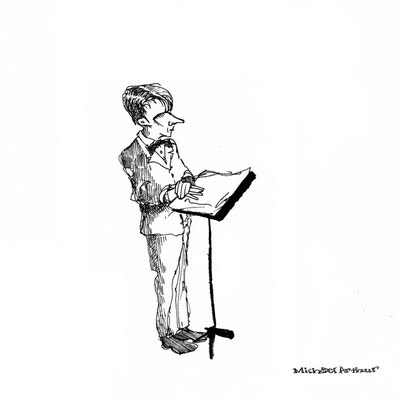 Earlier in the day, the New York State Senate had voted down the Gay Marriage Bill. “They’ll all be dead someday,” Mitchell sighed and shrugged, before unfolding some crumpled pages and reading aloud from a journal he kept during a trip to Russia for a screening of his film, Hedwig and the Angry Inch. The screening had been part of the first gay and lesbian film festival in Russia, a festival shut down before it could screen any film and driven underground in a land still emerging from underneath it all. The memories read aloud were bittersweet and poignant, and sadly less distant on a day when even the most impassioned hopes could not move the mountain of fear.

All participants at the Happy Ending are required to take a public risk and, for his, Mitchell concluded by singing a lullabye in Russian. In days gone by, he explained, the song he chose was broadcast every night on Russian television as a sort of transition between the broadcast day and the evening news. Mitchell talked about how everyone in Russia knew it and sort of hated it as a fossilized artifact, a dust-covered tune incapable of being new.

He sang it sweetly and beautifully and the room was as reverent, attentive and fiercely present as the room gets.

It was a same old song that almost no one there had ever heard before. It once signaled the end of a day that would start again, the same, tomorrow. It was sort of beautiful and sad and I can’t tell you what it meant, but it will stay with me for a while.”