Due to an insane workload, I don’t have time to actually write anything right now, so I have copy and pasted this entire post from WNYC’s Culture Page. If they sue me, I’ll make sure they bring the appropriate equipment so we can do a live podcast from court. 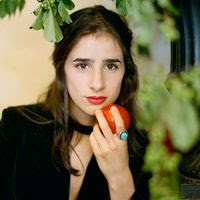 In a rare, themeless installment of The Happy Ending Music & Reading Series at Joe’s Pub, writers Adam Haslett, Sam Lipsyte and Zoe Heller did something “risky” on stage while Julliard-trained violinist and singer-songwriter Christina Courtin performed.
This series, curated by Amanda Stern, brings writers and musicians closer to their audience. Each reader is required to do something on stage that they’ve never done before, and the musician plays a sing-along to close the evening. The risks undertaken were the following:

Haslett seized the opportunity to read from Joan Didion’s Play It As It Lays. With a Scottish accent. And he nailed it.

Lipsyte screamed lyrics of a song from his high school band regarding “sticking the business-end of his thirty-ought-six into a dolphin’s blowhole.”

And Heller called for back-up singers from the audience for a poppy rendition of “the rousing revenge song of a former lover who’s happy that her ex-lover is unhappy too.”

Above, stream and download their readings and live music for free.


On Performing in a Band: “I would sit there in the corner and look as surly as possible while the band played an instrumental. Then I’d get up and do a short rant and then I’d put a cigarette out on my tongue — which I was going to do tonight but I’m sure it would violate some fire laws… But I was just a sad and angry boy. Now I’m a sad and angry man.” —Sam Lipsyte

On Ben Franklin: “I never knew you were an anti-semite.” —Sam Lipstye reading from The Ask

On Reproduction: “A study that Mike had read about in one of his chat-rooms suggested that women were more likely to conceive when they had orgasms.” – Zoe Heller reading from The Believers

The Silver Lining of Book Banning: